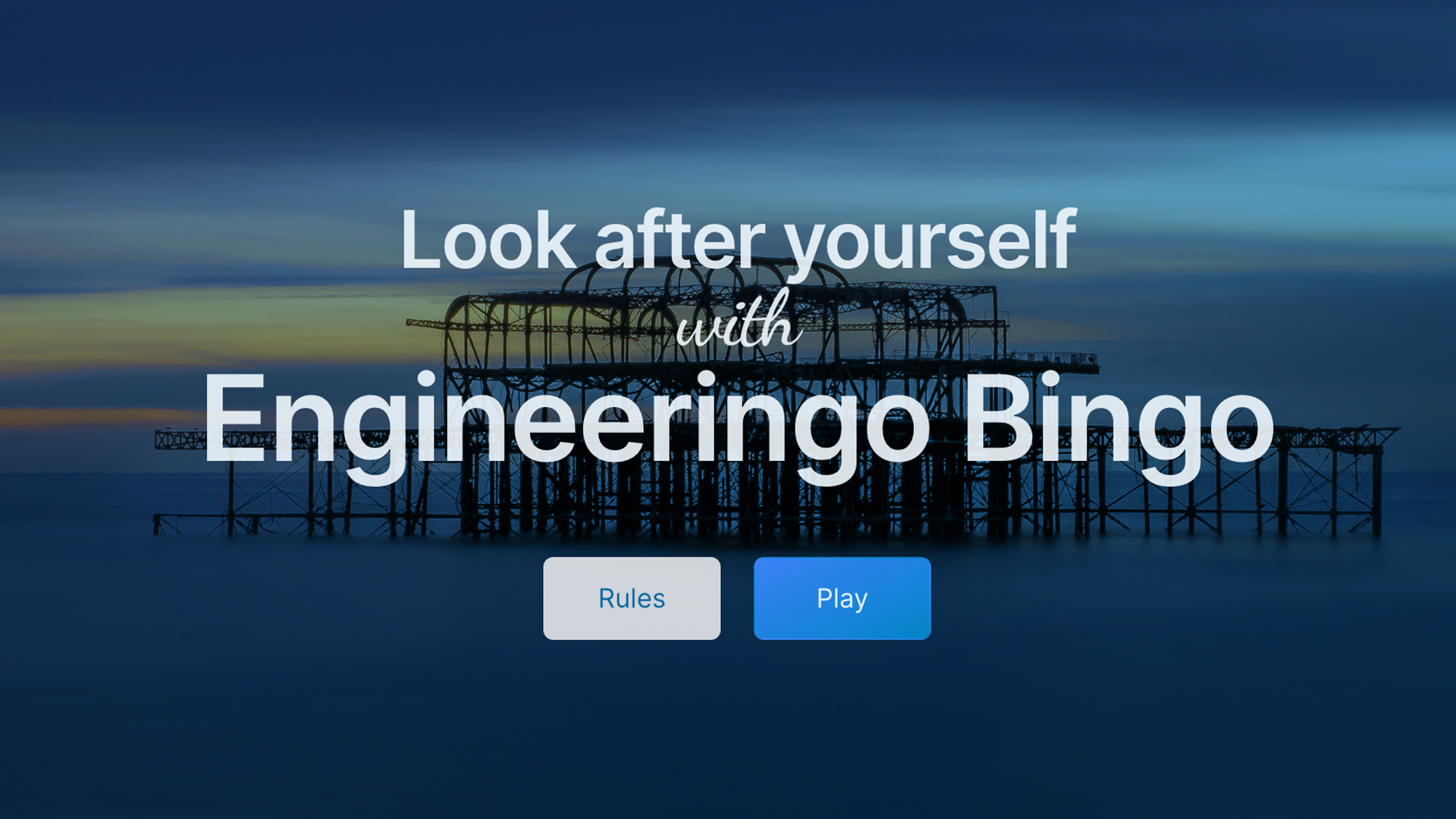 Over the last three months, I’ve been piloting a wellbeing app within the Engineering team - “Engineeringo Bingo” - a site that enables the team to track wellbeing habits daily, with the aim of encouraging a positive change. The experience has been gamified so that team members can score points and win prizes every month.

Mental health and wellbeing is something that we really care about at Tillo; we already do a number of things to raise awareness and start a conversation, including a Mental Health Champions blog for team members of all seniorities to share their own experiences and challenges with mental wellbeing.

Mental health is also something that’s very important to me personally; so, like all the best side projects, this idea germinated from the need to help my team (and myself) strike a better health- and work-life balance and improve our overall wellbeing.

As a manager, I see the impact that mental health difficulties can have on my team. The kind of focused work that we tend to do can lead to engineers unintentionally neglecting their physical and mental wellbeing. In fact, in a recent survey conducted in the UK, more than one third of engineers described their mental health as only “fair” or “poor.”

I thought I’d share a bit about why I created the app, what it does, and how it has helped the team so far so that other managers might be inspired to introduce something similar within their teams, and open the conversation around wellbeing, mental health, and building more sustainable and positive habits.

Why a wellbeing project?

The idea originally came off the back of an article that I wrote for our internal Mental Health Champions blog, which was a difficult one to write. I wanted to put something together to encourage everybody - including myself - to look after themselves and look out for one another. Work is really busy and can be stressful so I wanted to find a way to make sure that people are taking care of their wellbeing. Software development in particular involves a lot of screen time, with people often becoming so involved in the code that they forget to take proper breaks, drink water etc. That said, this is also true of most modern-day jobs where a lot of screen time is involved.

Essentially I wanted to encourage all of us to do the things that we know we should be doing already - and have a bit of fun in the process! By coming up with a game, I thought I’d encourage a little healthy competition between us all to get better at forming healthier habits.

I’d had an idea of what I could produce to help people take better care of themselves and I asked the team what they do to look after themselves during the working day to help validate my idea.

I realised there are a bunch of tasks that the team should attempt to do throughout the day, and if they were to take note of what they’re doing, then over the course of the month, they would hopefully see a gradual improvement to their health and wellbeing, and find a better work-life balance.

The tasks fit neatly into four categories and the aim is to complete as many as you can every day:

Naturally, there are a few simple rules:

From the outset I knew that something low-tech wasn’t going to be sustainable nor widely adopted. Asking individuals to track their progress without a template wouldn’t work, and even if I provided a template as a PDF to be printed, that wouldn’t scale to the size of the Engineering Team.

As an engineer, I relished the challenge of creating something that made it easy for everyone to track their progress easily, wherever they are.

How Engineeringo Bingo has helped the team so far

It landed very well with the team and it’s very cool to see it being used by over 30 people with everyone checking in and completing tasks. Almost 600 tasks were completed in June alone and since its launch - a mere three months ago - over 1,600 tasks have been completed in total.

Every Friday, the team gets a notification with what they’ve tracked so far that week and I also mention it during the team meetings on a Monday - which tends to spark a bit of activity and reminds everyone to keep playing.

I’m really excited to see what the team gets up to each month and I have big plans for Engineeringo Bingo going forward!

If you’re looking for your next engineering challenge (and like the idea of playing Engineeringo Bingo yourself) then please take a look at our open roles - we’d love to hear from you.

The new year is often a time of reflection and this year our team have pulled together some key stats across sales, product,...

I recently sat down with Junior Software Engineer at Tillo, Gerome Braddock, to find out how his love of coding began, what led...