We recently sat down with Jack Chapman, a Front-End Engineer at Tillo, to find out a bit more about what his role involves, where it sits within the team and what he likes most about it.

Interested to hear about what it’s like to work in the Engineering Team at Tillo? Why not visit our engineering hub to find out more.

Can you share a little about your career path? What made you want to work in software engineering?

In this kind of role, there are often some interesting backgrounds. When  in sixth form at school, I had this idea that I wanted to be a graphic designer or get into architecture. But at the same time, I was really  interested in music. So when I went into A Levels, I did graphic design  and art, as well as music technology. The choice to do music was really that I thought it would be something fun I could do, and not be  constantly stressed out about coursework. But it turned out I was way better at music than graphic design - and so I carried on and went off to Bath Spa University to study Music Technology.

Studying Music Technology was a great three years - I thoroughly enjoyed it, learned tonnes and had plenty of interesting experiences. When I got out of Uni though, finding a job that was related to my degree was  harder than I first thought, which I think is something lots of people experience. I started working in a cafe trying to find my music tech career somewhere. I was doing things like applying for TV and film studios. I was specifically interested in doing game audio; doing sound design and integrating it into the game engines so there was a technical side to it, as well as a creative bit to make all the weird noises that you hear in games; I liked that there’s no limits on what you can do  with a game so you can make it whatever you want. I did get a couple of interviews but I didn’t get the job as I was a bit fresh to it all, and didn’t really know how a lot of it worked.

So I figured the best thing to do would be to try and make my own games - so I started to learn game development. This is a really, really difficult thing to learn by yourself as so many different disciplines come together. But I started doing it anyway and I found it very interesting and fun.

The bit I loved most was that because it was a game, it was still quite visual - so I’d do some code and then go and have a look at the game and see how my coding had changed what happens in the game. The difficult thing was that there’s lots of work to do to get to that point; it would take you a couple of hours to get up to the point where you could do the creative coding bit and see what changes you’d made. I was learning a lot and using some websites and courses to learn more.

There was a web development course I was taking that I just thought I’d have a go at as it would be a different challenge - the difference was that you could see your changes reflected almost immediately in your browser instead of in a big game engine so I could go from the idea, to building it, and seeing the updates much quicker than with the games. I got hooked on it and went through the courses teaching myself web development.

I realised that the best way to carry on learning was to try and make some of my own games and apps to play in your browser. And there’s where my real interest in front end development came from. I was really interested in the visual element of it - I was able to  bring that graphic design side of things from my past into the mix. I was working in a tech support type of role at the time at an audio company that sells speakers - and I was teaching myself all of this in the background. Eventually, I got to the point where I’d been learning for almost two years and I felt that I could get a job in development and probably not  embarrass myself too much!

I applied for Tillo in 2018, and I remember I was interviewed by all six of the other developers at the time - all at once in a room. But I think for half of the interview we actually just spoke about video games so it was pretty enjoyable. And then the next step was to come and have a  chat with Martyn and the CEO.When I got the job, I started off as a junior web developer. They didn’t want to scope me down to just doing front end as I was still pretty new to it all - so it was good to be involved in all sorts of things. I was doing a lot of varied work and then gradually became more specialised as my expertise in front end development. Eventually, my role became ‘front end developer’ which is where I am now.

I do sometimes wonder whether I would be where I am today if I’d done computing or IT at A-Level. Maybe I would have got really burnt out on it and just decided not to do this anymore. Who knows but I’m happy where I am - I’ve taken quite a winding path but the right one for me.

What does your role at front end engineer involve?

At Tillo, all the software engineering we do is web based, which means there’s a range of different disciplines that make up the whole arena, where you focus on different parts of the application. We have back end engineers, data engineers, dev-ops, and more, and everyone is focused on different parts of the software. Front end engineers basically wrap everything up and make it nice and neat and pretty for customers to use. Everything you would see in your web browser when you go to a website is the front end.

Back in the day, front end was looked down on a little bit because it was very simple but now browsers and computers have become more  powerful, and more features have been added into the programming  languages we use on the front end, so we’re able to do a lot on the front end now. It used to be that 90% of what happened on a website was handled in the backend and 10% at the front end but now it’s closer to a 50-50 split.

There’s a lot of change going on now in front end development and that’s part of what keeps it fresh and interesting; it’s constantly evolving and it takes a particular kind of person to be interested and want to keep up with it.Within the team, front end development sits somewhere between the back end  developers and the designers. We spend a lot of time working with the design team. We’ve got to make sure that what they’re designing is actually possible to code up (most things are possible but some can be particularly time intensive). There’s an element of communication there to help align things, and ensure things can be worked on smoothly.

And then we work very closely with the back end team, because there  has to be communication between your website's back end and front end. When you hit the save button, that data has to go somewhere and that’s the kind of communication that takes place. Although in the past the front end developer sat more on the design side of things, now the role  has become much more involved and become a highly specialised domain. It’s quite complex but very interesting!

What’s your favourite thing about your role?

My favourite thing about the role is the problem solving part of it, which is not just specific to front end development. 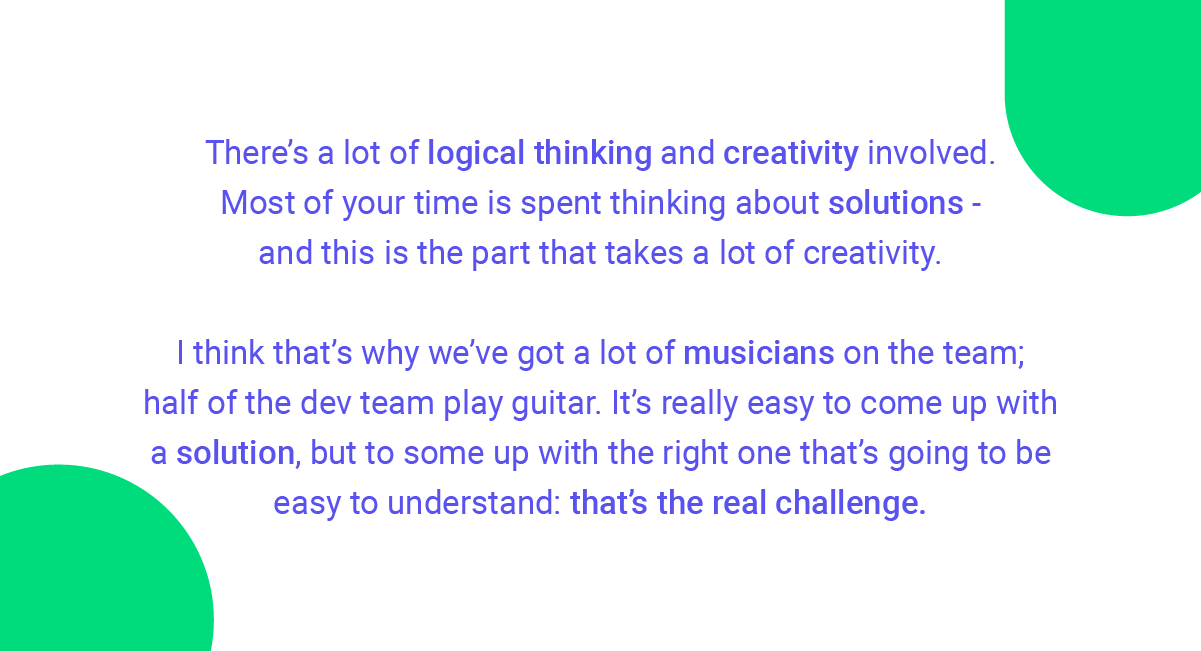 When you first start off in software development, you tend to be given tasks that are quite self contained - and hopefully the changes you make won’t impact lots of other places. But as you become more experienced, you’ll be asked to do bigger pieces of work that might involve lots of different parts of the system, and how they talk to each other. That’s the thing that I find is really exciting and gets the gears turning.

In particular, the architectural side of it is my favourite. You’re splitting your UI into little tiny pieces, and focusing on making sure that they all have their own responsibilities, and how they will talk to each other.

What do you like most about working at Tillo?

When I had my first interview with Tillo all those years ago, I was blown away by how friendly everybody was, and how open they were to talking about their projects even though I was just a junior and didn’t really have any previous experience; they were really open and happy to talk about work stuff with me.

Even if I hadn’t landed the job, I feel I would have come away with something but fortunately I did get the job! I’ve been very happy ever since! I like the openness to accept other people's ideas as well as the ability to trust in what I believe to be correct in a particular situation.

More senior people are open to accepting that they have gaps in their knowledge and will listen to ideas. Now that I’m the most experienced  front end engineer in the team, I have quite a bit of autonomy to choose the direction we go in and freedom to approach problems. I think that trust is really valuable! Ultimately, being given ownership of your work means you’re going to be happier working on it - you’re going to be more invested in it too.

I’ve now got two junior front end developers working on my team and I act as a mentor for them; they both started in a similar kind of position to me. So it’s been really interesting to see them face the same kind of challenges that I’ve faced in the past but to come at it  from a slightly different angle - it’s nice to be able to sometimes give them a nudge in the right direction without necessarily telling them the answer so that they can find it themselves. They’ve been here for almost a year now so they know what they are doing - the discussions have gone from “how do I fix this little thing?” to “how do I do the larger, more architectural, wider piece of work?” That’s the really interesting part.

It’s really exciting to see the team growing - not just in numbers, but also in experience.

I recently sat down with Junior Software Engineer at Tillo, Gerome Braddock, to find out how his love of coding began, what led...

I recently sat down with Junior Software Engineer, Leanne Zammit to find out how her first month at Tillo has been, what the... 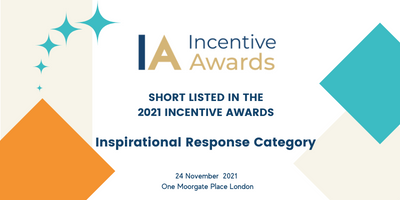